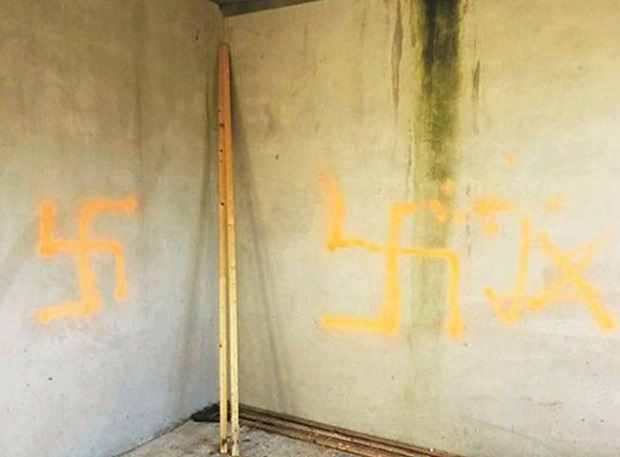 The Proswastika Alliance condemns politician Peter Jacob for furthering his political goals by associating the peaceful swastika symbol with hate and fear. Jacobs is an Indian-American Democrat running for a seat in New Jersey’s 7th Congressional District. Swastikas were spray-painted on the sidewalk and on the walls of Jacob’s home in two separate incidents between October 7 and October 10.

“It’s clearly a hate crime. It’s something that says, ‘I hate you.’ It's completely un-American and it’s unacceptable that someone should do this in such a beautiful, diverse community,” said Jacob, according to New Jersey's News 12.

Quick to associate this incident with his running mate, Representative Leonard Lance, a Trump supporter, Jacob said he had no doubt that Lance’s support of Trump was to blame for the incidents, according to CBS News.

Lance has also responded to the spray-painting events, saying, “The display of anti-Semitic symbols like the swastika is abhorrent.”

Clearly both politicians fail to understand the traditional meaning of this beautiful, ancient symbol. What’s more, they are also engaging in fear tactics by besmirching a symbol revered by 1 billion Hindus worldwide as well as many other cultures.

Jacob, born and raised in India, could have acted consciously by not playing into the swastika’s negative association with Hitler and the Nazis. While those who damaged his personal property should be punished by law, he knows better than to disgrace the swastika and those who revere it to gain public sympathy and support.

The swastika has been a religious and traditional symbol of peace and well-being for thousands of years. In its traditional, pre-Nazi era use, it was never antisemitic or hateful. Pre-1930s swastikas can be found in Jewish synagogues and other religious edifices as well as on cultural artifacts around the world. Disgracing the swastika is a hurtful, religious insult to the millions of people worldwide who still use it as their religious symbol.

Events over the past few years have clearly discriminated against Hindus and others in New Jersey who revere the swastika. In 2013, an 8-year-old Hindu boy was punished by his school for drawing a swastika on a Christmas tree as part of a holiday assignment. This latest incident involving Jacob comes at a time close to Diwali (the Festival of Lights), a major Hindu celebration in which the swastika is openly displayed.

We’re sure Jacob wouldn’t think to denigrate and disgrace crosses displayed in public or private places, even though horrific events were perpetrated worldwide under that symbol against many indigenous populations. Accordingly, the swastika’s reputation should no longer be unjustly tarnished by the fact that Hitler misused it.
Tweet