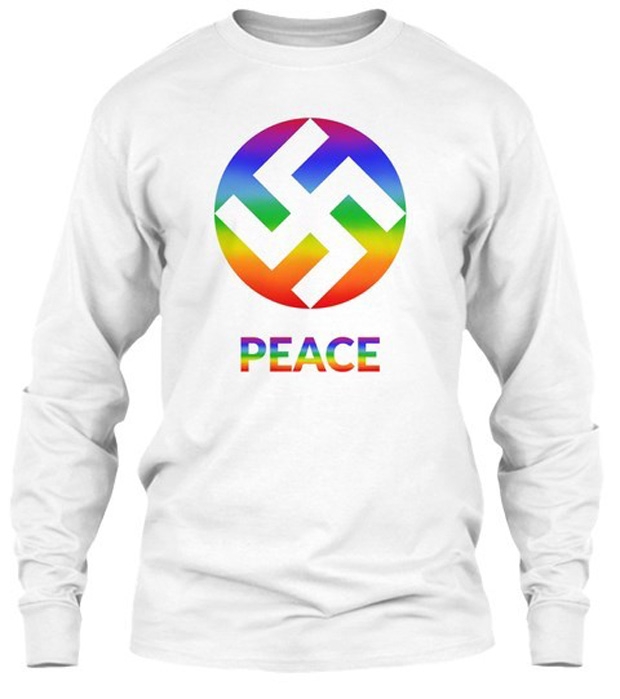 LAS VEGAS, Aug. 23 – In a statement released this morning, the organization Proswastika declared its support for KA Designs, a design company that uses the swastika as a symbol of love on some of its tee shirts despite opposition in the West. The organization is also asking communities who revere the symbol to boycott and sue entities that discriminate against it.

“It’s not because nobody sees the truth that it becomes an error,” said Proswastika founder Maitreya Rael. “It [the swastika] is a symbol of peace, period. If all symbols used by criminals were forbidden, the Christian cross should also be forbidden after the crimes of the crusades and the Inquisition.”

“That those crimes happened long ago changes nothing,” Rael declared, adding, “A crime is a crime, but a symbol of peace is a symbol of peace. All Buddhist and Hindu countries should boycott and sue countries that discriminate against their religious symbol.”

“KA Designs is being heavily trolled on Facebook,” said Proswastika President Upendra Singh. “We’re asking people to support us and help educate those who associate the swastika only with hatred. Before the Nazis, the swastika had only positive connotations of good luck and well-being. Continuing to associate it with the Nazis gives them credit for it, which is probably the last thing their victims would have wanted. Would you also ban the Christian cross? Remember, tens of millions were murdered under that symbol in the Americas, Africa and Europe, and the Klu Klux Klan also used it!”

The swastika was also a Jewish symbol before the Nazi era, Singh said.

“It’s on old synagogues, including in Verona, Italy, and at many Israeli holy sites like the Second Temple,” he pointed out. “Nobody asks that they be removed, so why is displaying swastikas such an issue in the West? There’s discrimination against public displays of the swastika even when the intent is peaceful. How would Christians and Jews react if the cross or Star of David was discriminated against? Those who revere the swastika, such as Hindus and Buddhists, should stand up for their right to publicly display this ancient symbol. Education is the solution, not banning!”

“We really like this symbol for its shape and aesthetics, and we’d love to share that beauty detached from the hatred associated with it,” said a spokesperson for KA Designs quoted in Dazed and Confused magazine.
Back to category overview   Back to news overview
Older News
Newer News