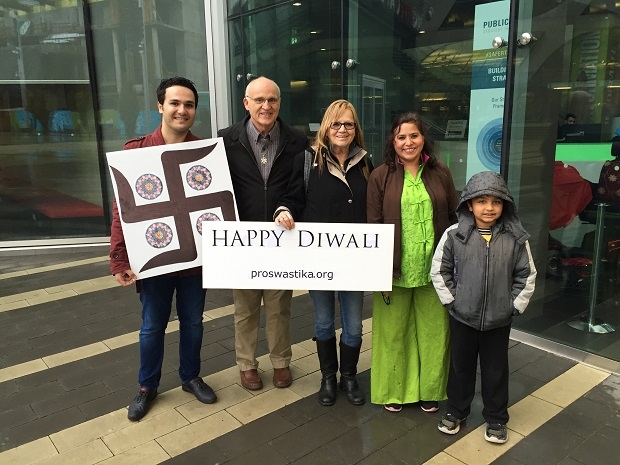 Within a few minutes of being outside the Surrey city hall where the Diwali festival took place, a Caucasian lady who was part of the organization came outside and asked us why we were there. After explaining that we, the Raelians support the Hindus who also use the swastika as our spiritual symbol while pointing to the poster we had of the Hindu swastika, she said "well don't you think you are bringing a negativity here with the poster of the swastika?" I said "so if I understand you well, are you saying that the Hindu swastika is a symbol seen as being negative for Hindus and for the people at this festival?" She kind of stumbled upon her words and went back inside.

A few minutes later five different security agents came from different places, we were calm and said hello, they seemed calm too. I explained to them why we were here and that we were supporting the Diwali festival and the peaceful, spiritual use of the swastika. It was interesting as all the security agents were of Indian descent, they said ok we understand no problem and they went on their way. One of the agents even came back and chatted with us about the use of the Swastika and how it can be ignorantly received by the western cultures due to Hitler befouling the original peaceful and spiritual use of the swastika.

We had many Hindu people come to us saying what a beautiful symbol, one person even wanted to touch the symbol. A while later we saw this Caucasian lady approach us from the other side of the open court yard, she came right up to us and said "this is fantastic to see you guys here supporting this ancient symbol". As this lady was talking to us about the positive image of the swastika another Indian lady came outside and invited us in to eat, sit down, and to watch the show if we wanted to. At this point another lady who came to us across the courtyard said she was so happy we were there as she was lost and if we were not there with the of poster of the Hindu swastika she would not have found the festival.

It was a great event and a pleasure to meet all these wonderful polite and conscious people who thanked us for being there.
Awareness is growing about the true origins of the swastika.

David Dunsmore
Raelian Guide for the west coast of Canada 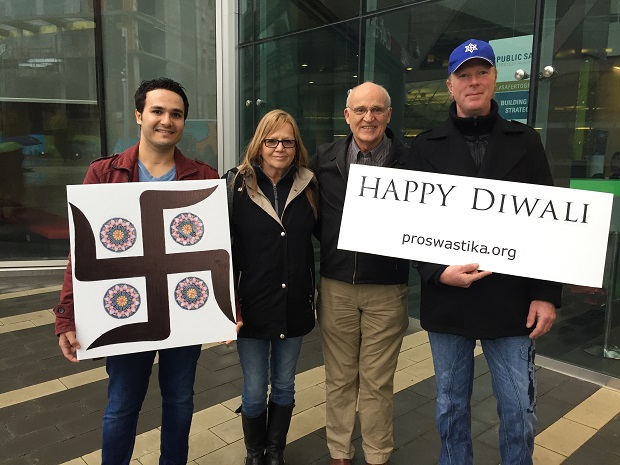