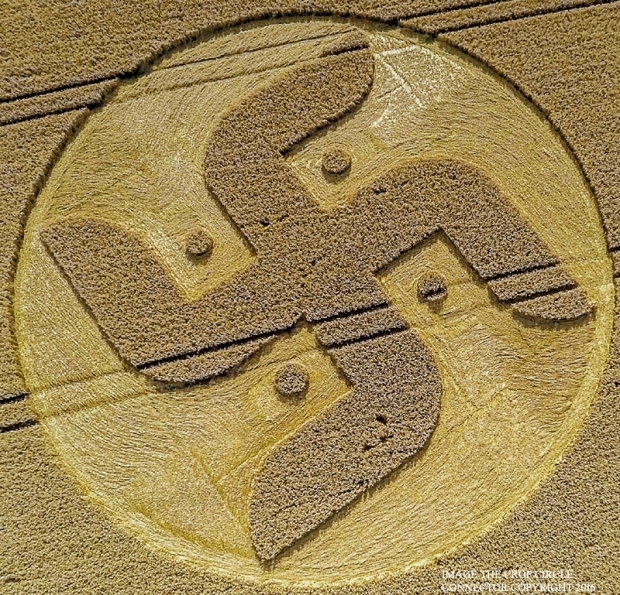 LAS VEGAS, September 1 – A crop circle that appeared literally overnight in a Wiltshire, United Kingdom, field a few days ago depicts an ancient symbol of peace and good will rather than anything to do with twentieth century thugs, according to a statement released today by the International Raelian Movement (IRM).

The 170-foot-wide anomaly, located in a farmer’s field in Beckhampton, U.K., near Avery, has been widely publicized for the last few days in worldwide media reports. Ancient mysteries author Hugh Newman was able to capture the formation on video by using a drone after the farmer refused entry to his field, saying he was concerned about the circle’s similarity to the symbol used by the Nazis.

“The swastika is indeed originally an extraterrestrial symbol since it comes from our extraterrestrial creators who told us it represents infinity in time,” said Raelian Guide and president of the ProSwastika Alliance Thomas Kaenzig. “And since all ancient cultures related to our creators, the swastika can be found all over the world as a symbol.”

He went on to explain that since so many of those cultures had no contact between each other, the commonly found swastika symbol must have a common source.

“That common source is our extraterrestrial creators, the Elohim,” Kaenzig said. “And although we can’t confirm that this crop circle was created by the Elohim, all the publicity is making people wonder about the origin of crop circles as well as the origin of the swastika symbol. That’s a really good thing!”
Back to category overview   Back to news overview
Older News
Newer News