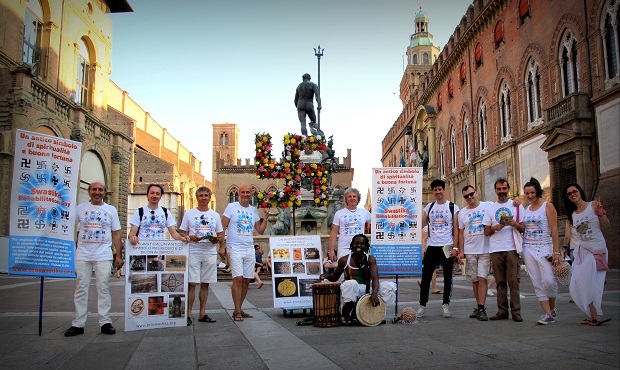 LAS VEGAS, June 22 – For “Swastika Rehabilitation Day,” June 25, Raelians will hold worldwide events, including flying banners over U.S. cities, to inform people about the ancient, peaceful meaning of the swastika.

“New York State Senator Todd Kaminsky [D-Long Beach] introduced a bill to ban public displays of swastikas,” said Raelian Guide Thomas Kaenzig, who heads the ProSwastika Alliance. “That would infringe upon the freedoms of speech and religion guaranteed by the U.S. Constitution.”

Indeed, for many Americans, the swastika is still a sacred symbol, despite its unfortunate association with Hitler.

“It’s a cherished symbol not only by Raelians, for whom it represents infinity in time, but by Hindus, Buddhists and Jains,” Kaenzig explained. “Banning a religious symbol is like banning a religion. It affronts both the members of that religion and a supposedly free society in general.”

While Raelians deplore the Nazi crimes, they say Hitler unfairly besmirched a revered symbol that had existed for thousands of years.

“Previously, the swastika had only positive connotations of good luck and well-being,” Kaenzig said. “Continuing to associate it with Nazis gives them credit for it, probably the last thing their victims would have wanted. Would Senator Kaminsky also ban the Christian cross? Remember, tens of millions were murdered under that symbol in the Americas, Africa and Europe, and the Klu Klux Klan also used it.”

He said the swastika was a Jewish symbol too, for a very long time.

“It’s on old synagogues, like that in Verona, Italy, and in many Israeli sites, including the Second Temple, one of the holiest places for Jews,” Kaenzig pointed out. “Nobody has asked that those symbols be removed, so why is displaying swastikas more of an issue in New York? Education is the solution, not banning. That’s what Swastika Rehabilitation Day is all about.”

“Shapeways, a 3D printing company, is refusing to print any design incorporating a swastika – even though they printed an embassy model incorporating one that we submitted,” Kaenzig said. “But when we submitted a model for the symbol itself, they refused the order and advised us of the ban. We’re asking all Hindus, Buddhists, Jains and Raelians to boycott Shapeways services for banning this symbol so dear to us all.”
Back to category overview   Back to news overview
Older News
Newer News