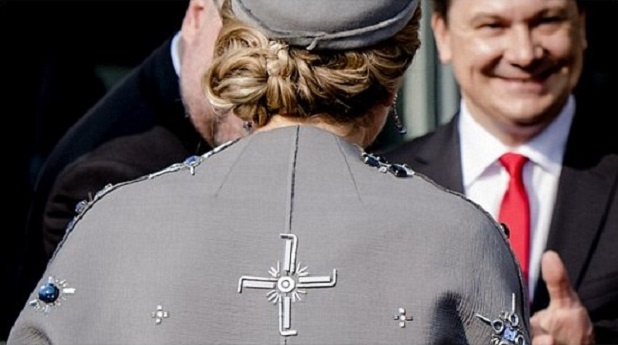 LONDON, April 20 – According to the German newspaper Bild, Queen Maxima of the Netherlands on a recent visit to Germany wore a coat decorated with details resembling the Nazi swastika. However, another German newspaper, the Rheinische Post, disagreed, saying the pattern more closely resembled the Buddhist symbol for eternity.

“The ProSwastika Alliance supports both the queen of the Netherlands and the Danish designer who made the dress,” said Thomas Kaenzig, Raelian Guide and president of the ProSwastika Alliance. “The swastika was an ancient, honorable symbol thousands of years before the Nazi era, and it can be found all over Europe. That includes Denmark, where it can be found on ancient stones dating from 800 CE.” (http://proswastika.org/news.php?item.81.6)

Many official buildings in Germany are decorated with pre-Nazi era swastikas, Kaenzig pointed out.

“Those in Germany who got upset about the queen’s attire should first ask their own president to remove the swastikas from his residence (http://proswastika.org/news.php?item.101.6),” he said, adding that people often know very little about the ancient and honorable pre-Nazi history of the symbol.

“Fortunately, people are becoming more and more aware of its original and beautiful meaning: good will and peace,” Kaenzig said. “For example, in Japan the government at first wanted to remove the swastika symbol that indicates temples on their tourist maps. But they decided to keep it after getting feedback from informed people around the world, including many Raelians. We were very active in giving our support for keeping this symbol that is so dear to many Japanese.”
Back to category overview   Back to news overview
Older News
Newer News