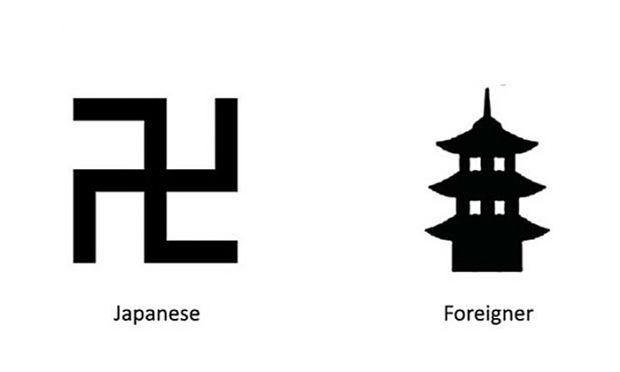 LAS VEGAS, Jan. 22 – The International Raelian Movement (IRM) is protesting a recommendation by Japan’s Geospatial Information Authority that would lead to dumping a swastika-like symbol from maps, according to a statement released today by the IRM.

“After taking a poll in which westerners in Japan were asked their opinions, the Geospatial Information Authority recommended replacing the ancient manji with a pagoda symbol to mark temples on maps ahead of the 2020 Olympics,” said Raelian Guide Thomas Kaenzig, spokesperson for the Raelian Movement and President of the ProSwastika Alliance.

Raelians are strongly opposed to the symbol replacement plan.

“The swastika has been a traditional symbol of Japan for millennia and the Japanese shouldn’t bow to western cultural imperialism,” Kaenzig said. “Would western countries change their own map symbols for the Olympics? And more to the point, would they replace the cross symbol that indicates churches on maps because horrific events were perpetrated against indigenous populations worldwide under the cross symbol? Remember, Japan never misused the swastika symbol that way. It was Hitler and his Nazis who did.”

The Japanese agency is soliciting additional input on the symbol replacement matter until February before making its final decision.

“We intend to gather the support of all the religious organizations who use the swastika as a symbol of peace like us as it is very important that the manji remain on the maps,” Kaenzig said. “The ancient swastika image is revered around the world, and has long been associated with Buddhism and Japanese culture. The swastika’s reputation should no longer be unjustly tarnished by the fact that Hitler misused it.”
Back to category overview   Back to news overview
Older News
Newer News