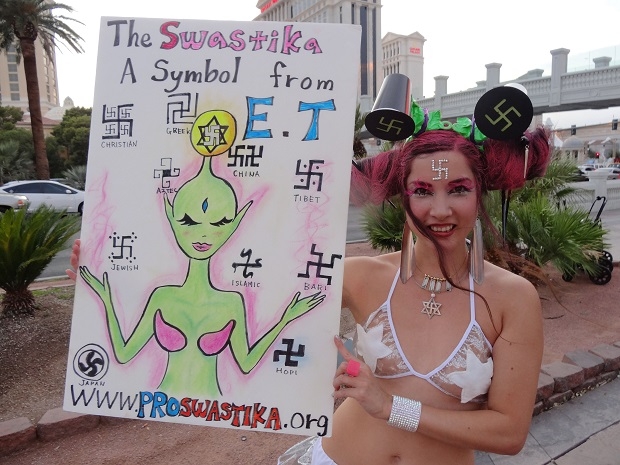 LAS VEGAS, July 3 – From July 5 to July 12, the International Raelian Movement (IRM) will hold worldwide events celebrating the swastika’s ancient meaning of well being and good luck, according to a statement released this morning by the IRM.

Still revered in many parts of Asia, the swastika is also special to Raelians because it intertwines with two interlocking triangles to form the Raelian symbol. The IRM wants to rehabilitate the symbol by renouncing all Nazi associations and restoring its traditional meaning.

“For our fifth annual celebration of this beautiful symbol that was criminally hijacked by Hitler, we’re holding a Swastika Rehabilitation Week rather than a Swastika Rehabilitation Day,” said Raelian Guide Thomas Kaenzig, president of the ProSwastika Alliance. “To conclude the week, we’ll again fly banners featuring the swastika over coastlines of several major U.S. cities, as we did previously.”

He pointed out that pre-Nazi-era swastika images are found worldwide, including places that surprise those who associate it only with Nazis.

“Many pre-1930s Jewish synagogues contain swastikas,” Kaenzig said. “It was widely used in the area known today as Israel and had only positive connotations for Jews. (See www.proswastika.org/israel.) The noted documentary filmmaker Yoav Shamir observed that the swastika was used in the Second Temple.” (http://proswastika.org/news.php?extend.45)

Swastika Rehabilitation Week events are intended to gain worldwide recognition and vindication for the symbol.

“The swastika’s honorable heritage and positive meaning are known to billions in the East, but its ancient, lovely meaning is almost unknown in the West,” Kaenzig said. We see this as a global re-education effort.”

He explained that the swastika in the Raelian symbol stands for infinity in time, with the interlocking triangles representing infinity in space. The image is featured at Raelian Happiness Academies worldwide and used year-round in accordance with Raelian philosophy.

“The Elohim, those who created us and inspired all major religions, gave us this symbol,” Kaenzig said."this is why it can be found on all continents and in most past civilizations as one of the many traces of their interaction with our ancestors"

He invited members of all religions that revere the swastika, plus others who believe in religious freedom, to join in this year’s events.

“When Westerners say the swastika should be forbidden because the Nazis used it, they’re denying millions the right to freely live their religions,” Kaenzig said. “Let’s rehabilitate this symbol and eliminate any remaining taint from those who hijacked it in the 1930s!”
Back to category overview   Back to news overview
Older News
Newer News